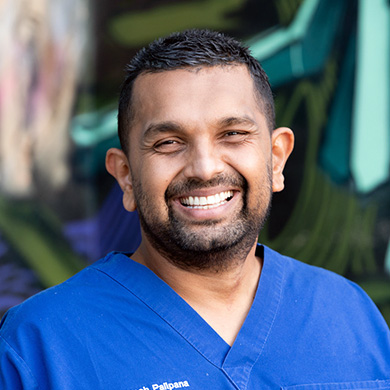 Dinesh was the first quadriplegic medical intern in Queensland, and the second person to graduate medical school with quadriplegia in Australia.

Dinesh earned a Bachelor of Laws (LLB), prior to completing his Doctor of Medicine (MD) at the Griffith University. He has completed an Advanced Clerkship in Radiology at the Harvard University. Halfway through medical school, he was involved in a catastrophic motor vehicle accident that caused a cervical spinal cord injury.

As a result of his injury and experiences, Dinesh has been an advocate for inclusivity in medicine and the workplace generally. He is a founding member of Doctors with Disabilities Australia.

Dinesh is currently a resident medical officer at the Gold Coast University Hospital. He is a lecturer at the Griffith University and adjunct research fellow at the Menzies Health Institute of Queensland. He has research interests in spinal cord injury, particularly with novel rehabilitation techniques.

Dinesh is the Gold Coast University Hospital’s representative in the Australian Medical Association Queensland’s Council of Doctors in Training. He is a member of the scientific advisory committee of the Perry Cross Spinal Research Foundation, disability advisory council at Griffith University, and the Ambassador Council at the Hopkins Centre. He is an ambassador for Physical Disability Australia. He is a doctor for the Gold Coast Titans physical disability rugby team.

You are here: Home > Team Members > Board Members > Dr Dinesh Palipana OAM
Back to top ^