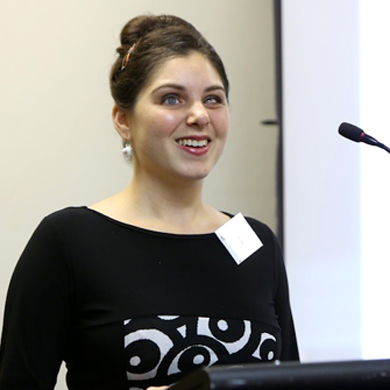 Nas Campanella joined the Motivation Australia board in 2018. She has completed a Communications degree at the University of Technology Sydney, majoring in journalism. Nas is a journalist and newsreader with the ABC and triple j. She lost her sight when she was six months old. Nas also has a sensitivity condition called Charcot-Marie-Tooth which means she can’t read Braille.

Nas also works as an MC and public speaker, presenting at schools, conferences and charity fundraisers on topics such as inclusive education, adaptive technology, accessibility and supporting women to climb the corporate ladder. Nas has supported young people with vision impairments to transition into mainstream schooling. She also works as a mentor to people with disabilities and mental illness.

Her strong interest in travel has seen her publish articles with Lonely Planet and the Sydney Morning Herald. She’s also given advice on accessible travel to members of the tourism industry. In 2016 Nas was part of a Disability Empowerment Skills Exchange in Fiji where she worked in a media communications and advocacy role with the Spinal Injury Association in Suva. During the month-long exchange, Nas devised a social media strategy for the organisation, assisted in the design and launch of a disability awareness training program for the United Nations and ran workshops in public speaking, press release writing and interview skills.

You are here: Home > Team Members > Board Members > Motivation Australia Ambassador: Nas Campanella
Back to top ^