Before Vilisi received her wheelchair, she was unable to go out of the house or to take care of her family – a role that is key to her identity as a Fijian woman. With amputations of both her lower limbs, Vilisi had poor mobility and health; restricted to lying in bed with dangerously high blood sugar levels –which is a risk to her ongoing health and well being. 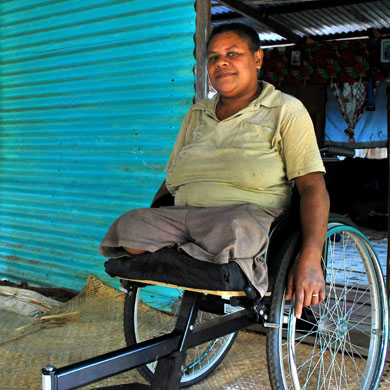 Vilisi was referred by the Spinal Injuries Association (SIA) to receive a wheelchair during Motivation Australia’s basic wheelchair service training in Fiji in May 2017; her first wheelchair since her surgery. During a follow up visit after receiving the wheelchair, Vilisi told SIA staff that the wheelchair had changed her life. She feels stronger and healthier and has seen her blood sugar levels drop drastically since returning home with the chair.

Having a wheelchair has made a big difference to Vilisi in her role as a woman. She feels that her responsibility is her family and the wheelchair has been pivotal in enabling her to take care of her family.She is independent now, no longer having to depend on her family. Vilisi also has a food stall at home which allows her to contribute to the livelihood of her household.

Vilisi is also changing attitudes in the community with many people noticing what she is able to do now with her wheelchair and telling her that “she can do things better than those who have two legs”. Vilisi’s wheelchair has made her life easier and she feels like there is nothing stopping her now.

Vilisi’s story reminds us that having access to an appropriate mobility device can change lives, influence community attitudes and empower women and their families.

Skip back to main navigation
You are here: Home > Blog > Our work > Pacific region > Fiji > Empowering women through mobility
Back to top ^