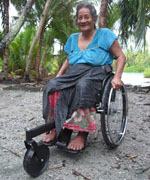 You are never far from the Pacific Ocean in Kiribati (pronounced Kiribas). In places the capital, South Tarawa, is only as wide as the road you’re standing on (which also happens to be the only road).

Kiribati is a Micronesian nation consisting of 32 coral atolls and one island, spread over an enormous area of the tropical Pacific Ocean. Kiribati is listed as one of the Least Developed Countries by the UN. It’s a fragile environment; unable to sustain much diversity of food (which leads to widespread diabetes) and extremely low lying making it one of the first nations likely to disappear when sea levels rise due to climate change.

Communication and transport are both problematic and can cause significant delays. It’s also a particularly difficult environment in which to be a wheelchair user; rough and sandy ground, no accessible buildings, salt water corrosion and torrential downpours.

Despite the challenges the staff of the Tungaru Rehabilitation Service, the impoverished nation’s only source of assistive devices, are committed to improving the lives of people with disabilities. Funds donated by Motivation Australia supporters have purchased 60 Worldmade wheelchairs which the staff have started to prescribe. In February the first of several planned outreach visits to outer islands was made to the atoll Marakei with three people receiving wheelchairs despite driving rain and transport delays.

Kiribati is a beautiful and fascinating place balancing on the edge of poverty and environmental disaster, largely forgotten by the outside world. You can play a part in improving the lives of people with disabilities in this impoverished island nation by continuing to support Motivation Australia.

For more information about Kiribati read this wiki.

Skip back to main navigation
You are here: Home > Blog > Our work > Pacific region > Kiribati > Island perspective: wheelchair provision in Kiribati
Back to top ^