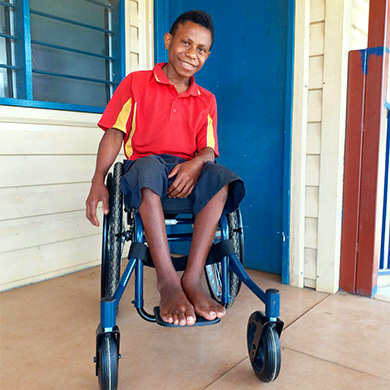 Two long standing members of Motivation Australia, Wendy and Daryl Teague met fourteen year old Jack whilst visiting Kompiam last month. Jack had received a spinal cord injury after a tree fell on him. After his accident he had been provided with a donated wheelchair, however this was not appropriate for his needs, as it was too small, hard for him to push and did not have a pressure relief cushion. Without a good cushion Jack was at high risk of developing a pressure sore which could have resulted in potentially life threatening complications for him. Recognising these risks Wendy and Daryl reached out to Motivation Australia and local service, the National Orthotic Prosthetic Service (NOPS)

NOPS was very keen to assist Jack, but do not have allowances within their budget to allow transport of wheelchairs or staff travel for outreach. However, thanks to the generosity of Wendy and Daryl an outreach visit to Kompiam was able to be organised within a short time frame.

Almah and Solo from NOPS just completed an outreach visit to Kompiam in the last week of June. After a plane ride for Almah and more than five hours travelling “bumpy” highland roads for them both, they arrived in Kompiam. Here they spent two days providing Jack and another young man, John, with new wheelchairs and assessing 10 other people in the community who require mobility devices. NOPS hopes to secure funding to carry out a further visit to Kompiam soon to provide these people with the devices they require and follow up with Jack and John.

MA would like to acknowledge, Wendy, Daryl, the team at Kompiam Hospital and Almah and Solo from NOPS for working together to organise the outreach visit to Kompiam. Thank you also to the LDSC for the donation of wheelchairs that were provided to Jack and John.

Skip back to main navigation
You are here: Home > Blog > Our work > Pacific region > Papua New Guinea > Outreach visits possible through member support
Back to top ^