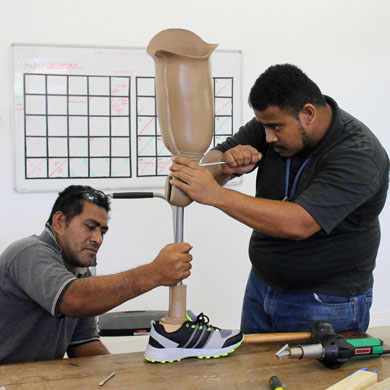 The Samoan National Health Service’s Mobility Device Service (MDS) will take another big step forward in the New Year with the much anticipated launch of Prosthetics and Orthotics services!

The end of November saw a surge of activity with the delivery of the eagerly awaited Australian Aid funded Prosthetic and Orthotic tools and equipment, along with a consignment of donated and purchased devices and materials from Australian suppliers. The MDS team and Project Manager Ray Mines were joined by two engineers from Otto Bock / Jos America, who worked hard over four days to install the delivered equipment. 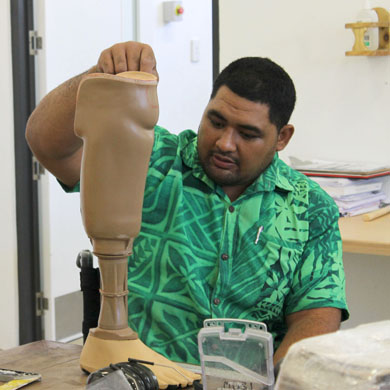 The equipment was immediately put to good use as MA held a week’s training on the use of the International Committee of the Red Cross (ICRC) prosthetic technology in the Pacific context. The polypropylene prosthetic technology made by the ICRC is the most tried and tested low cost prosthetic components for less resourced settings.

The training facilitated the MDS’s two Prosthetists Janus and Posenai, along with fellow Prosthetist Orthotists Akoaki and Tebakaro from Kiribati’s Tungaru Rehabilitation Service (TRS), to build on and share their experiences of the ICRC technology with the MDS bench technicians. With the support of Australian PO volunteer Richard, and MA’s Lee and Katrina, the team worked together to fabricate Samoa’s first prosthetic limbs!

The busy times for the MDS continued the week after training with a visit from Australian and Samoan Government officials, including Australia’s Minister for Foreign Affairs, Julie Bishop.

The activities will culminate with the official launch of the MDS’s Prosthetic
and Orthotic Services scheduled for the 4th of January 2017. 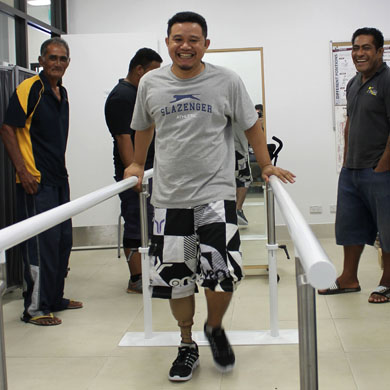 MA would like to acknowledge Australian Aid for the funding of the tools and equipment and thank Ossur Australia, Law Comfort, Algeos and OAPL for the donation of various prosthetic and orthotic materials and devices. Thank you also to the LDS Chruch Charities who funded Posenai’s training in Cambodia, and ISPO Australia who funded the I-Kiribati participants travel to and accommodation in Samoa.

Skip back to main navigation
You are here: Home > Blog > Our work > Pacific region > Samoa > New Prosthetics and Orthotics service in Samoa
Back to top ^