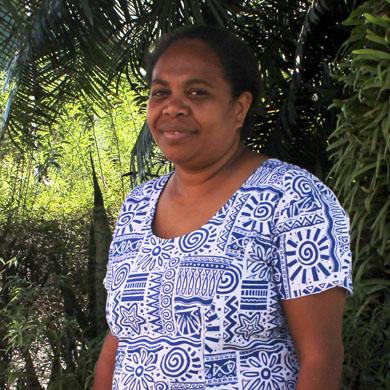 Life for people with disabilities in the Solomon Islands wouldn’t be the same without Elsie Taloafiri. A trained physiotherapist, Elsie is the Coordinator of the Community Based Rehabilitation (CBR) Unit and Acting Director of the Rehabilitation Division. Motivation Australia’s Service Development Manager, Lauren Flaherty recently sat down with Elsie, after eight years of working together, and talked to her about her journey.

Elsie says the clients are the most rewarding part of the job.

“When you work with them, and they see the importance of what you are doing; to see clients understand and the caregivers take on the responsibility”, she smiled.

“When people see their children grow – that makes them happy and be who they are.”

Elsie’s interest in physiotherapy was sparked after hearing that her father was treated by physiotherapists during his long career as an international athletics competitor in 1962 to 1967. In high school, when it came time for work experience in 1991, Elsie was excited about her placement at the Central Hospital (now the National Referral Hospital) in what was then called the ‘Exercise Department’. Physiotherapy was a new profession in the Solomons. At the time the department was run by therapists from England and New Zealand, and only 3 physiotherapisthas been trained.

Elsie continued to volunteer after her placement and was given a job in the department straight out of high school in 1994. The Senior Physiotherapist (from New Zealand) mentored Elsie while she completed nursing units at the local College; now the Solomon Islands National University.

In 2005 she was awarded a Solomon Islands government scholarship to study physiotherapy at Fiji School of Medicine now called Fiji National University.

Leaving family behind to pursue her career dreams abroad in her early 20’s was no easy task, but Elsie’s sacrifice has seen her shape a career based on helping others. After graduating, she returned to work at the National Referral Hospital before being transferred by the manager of CBR to the CBR Unit. It was a new department with two staff in the national office, limited budget and it lacked resources and any clear direction. With a positive attitude, Elsie saw the challenge as a good opportunity to learn. Two months later, the CBR manager resigned, leaving Elsie in charge.

Elsie searched long and hard for help, finally coming into contact with the Australian Volunteer Program. The organisation sent volunteer physiotherapists to run courses and train local staff to work with Elsie and keep the CBR unit running. Shortly after, a container of donated wheelchairs arrived. Sadly, they were inappropriate for the conditions and clients, with many breaking after a month.

Deflated but determined Elsie and one of the Australian volunteers started doing research, when they stumbled across Motivation Australia. After lots of discussion, Motivation’s CEO Kylie Mines flew to meet with Elsie. From there the partnership was formed. In 2009, Motivation Australia delivered the first wheelchair provision training in the Solomon Islands. In 2010, Solomon Islands hosted an international pilot for the World Health Organisations wheelchair training package. In 2012, Elsie and her colleague became the first team in the Pacific to complete ‘Training of Trainers’ with Motivation Australia and continue to train dozens of local personnel every year.

Elsie’s commitment and determination has enabled disability and community based services in the Solomon Islands to grow and thrive. Children and adults now have access to physio services that previously didn’t exist. They receive these services from trained, local staff.

Motivation Australia continues to support Elsie and CBR, delivering continuous training, supporting client home visits and ensuring the delivery of appropriate wheelchairs and other mobility devices to the Solomon Islands.

“Sometimes I meet people on the streets and they say thank you very much for what you did”, she laughs.

“Sometimes when I go to the market, or along the road – they say hello, and they realise I don’t know them and they say, ‘Remember? you helped me’.”

But Elsie said there’s still more work to do. “The target is to have rehabilitation officers in every health facility in the country”, she said. “We have 45 now and If I get to 100, I can retire.

Skip back to main navigation
You are here: Home > Blog > Our work > Pacific region > The Solomon Islands > Pacific profiles: Elsie Taloafiri
Back to top ^