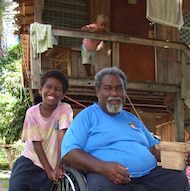 The Solomon Islands are situated North East of Australia and made up of nearly 1,000 islands spread across thousands of kilometres of Ocean. The UN ranks the Solomon Islands on its list of Least Developed Nations. There are approximately 5,000 people who need a wheelchair in the Solomon Islands, most living in rural areas with limited access to roads. The remoteness and isolation of each island community makes the establishment of rehabilitation services for people with a disability very challenging.

In 2009 Motivation Australia established a pilot wheelchair service in the capital Honiara. In 2010 Motivation Australia launched the Access to Mobility programme, building on our successful partnership with the Community Based Rehabilitation (CBR) Unit of the National Rehabilitation Hospital to extend wheelchair services to five provinces. Our partners would also like to increase the focus on gender equity and explore the reasons why more men have been able to access the pilot service than women.

Thanks to AusAID funding and a collaboration with the World Health Organisation (WHO), eight provincial CBR Workers were trained in wheelchair provision in July 2010 using the pilot WHO Training Package. The training was co-delivered by a Motivation Trainer and the National Coordinator of the CBR Unit, also a physiotherapist. Our programme aims to build the capacity of local staff to deliver this training independently in the future.  At the same time four technical staff were trained in Worldmade wheelchair assembly and a wide network of family members, volunteers and MoH staff received awareness training to help them support wheelchair users in the community. The trained CBR workers will have the capacity to prescribe approximately 300 adults and children with wheelchairs in the first year.

Motivation Australia is seeking additional funds for the project to establish wheelchair workshops in the four chosen provinces outside of Gaudalcanal: Makira-Ulawa, Western, Isabel and Malaita. Many thanks to the Victor Harbour Rotary Club in South Australia who have kicked off this appeal with a generous $1,000 donation. The workshops are not only an important part of the provision of wheelchairs, but will also form the foundation for future services aimed specifically at children who require postural support to sit upright, many of whom have cerebral palsy.

Skip back to main navigation
You are here: Home > Blog > Our work > Pacific region > The Solomon Islands > Solomon Islands: Access to Mobility
Back to top ^