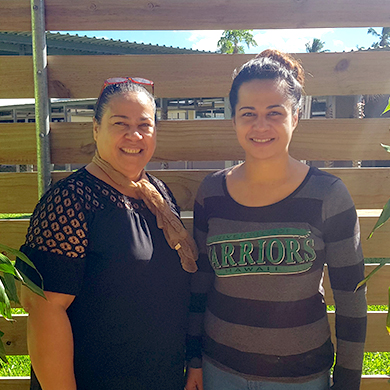 We are excited to share that Martha Schaumkel is on her way to Bangalore, India to study to become the first female Tongan Prosthetist/Orthotist .She follows in the footsteps of her Mother, Salote, who paved the way for female scholars in Tonga as she was the first female recipient of a nursing scholarship to study in Australia. Salote said that when she went to Australia she felt that “in my mind, I was the first one, so I had to study hard to show that it could be done.”

Martha has been working as the Client Liaison Officer in the Tongan Rehabilitation Department, as part of Motivation Australia’s work with the Ministry of Health (TRaM project). In doing so, she has experienced working with clients and observed rehabilitation team members providing services such as physiotherapy and wheelchair provision. The two returning lower limb orthotist (LLO) and lower limb prosthetist (LLP) scholars, Vai’uli Kohinoa and Sitanilei Folau, have further exposed Martha to the field of rehabilitation and what is possible to provide for fellow Tongans, particularly those impacted by diabetes.

Growing up, Martha became accustomed to seeing and working with people who are sick or in need of care as they often had guests who were in need of her mother’s nursing skills.

Martha will begin her studies in India this week and we wish her the best of luck. We look forward to updating you on Martha’s studies and journey over the next few years!

If you would like more information about the TRaM project, or work to strengthen prosthetics and orthotics regionally, please contact Lee Brentnall.

The TRaM project is funded by the Tongan Ministry of Health, with funds provided through the Australian Government’s Disability Inclusive Development (DID) programme.

Skip back to main navigation
You are here: Home > Blog > Our work > Pacific region > Tonga > Pacific Profiles: Martha Schaumkel
Back to top ^