Vai’uli Kohinoa is the first lower limb orthotist in Tonga, he is a highly motivated individual and his personal story showcases strength through adversity, perseverance and dedication to make a difference to his fellow Tongans. Motivation Australia has been involved in Vai’s journey since supporting his recruitment into the orthotist training course in India and through us he would like to share his story with you. 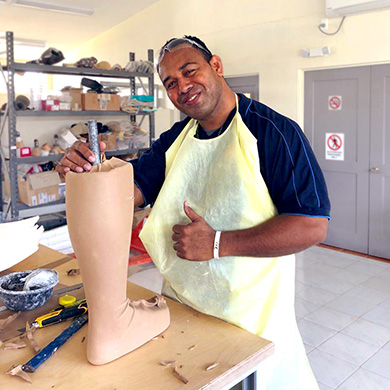 When Vai’uli was just 17 years old he was on the beach at his home island of Niua in the Kingdom of Tonga when he lost feeling in his legs. It took him and his parents three days to reach Vaiola Hospital by boat and when he arrived he was delivered the heart-breaking news that he would never walk again. They explained that perhaps a fall out of a coconut tree the year earlier was the cause and that unfortunately there was nothing they could do for him.

For a physically strong, active and sporty young man this was devastating news, and very hard for him to accept. He missed playing sport, being active with his friends and his inability to be able to do these things meant that unfortunately he lost many of his friends.

He was determined to walk again, he saw it as a challenge, one that he was not going to fail. He started his own rehabilitation routine. He tied a rope between two posts, enabling him to pull himself up and push through his legs to learn to walk again. He continued doing this and astonishingly his strength improved, and he never looked back. As he describes it; ‘without me I would have never walked again’. 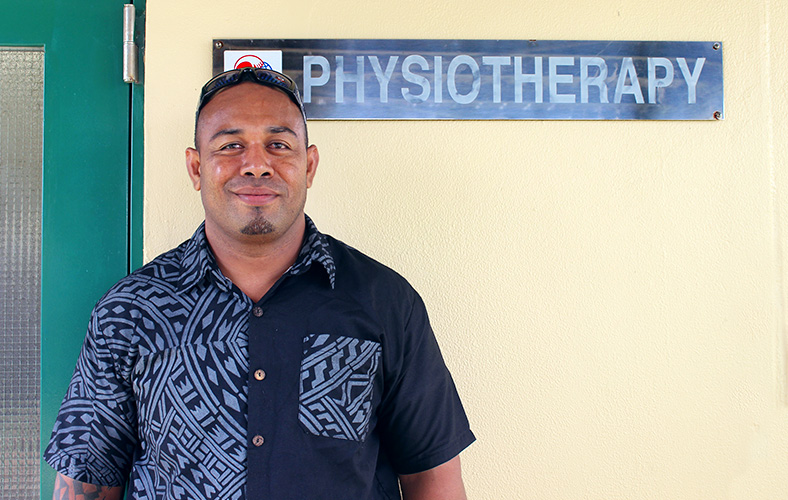 NATA (the Tonga disabled persons organisation) supported his rehabilitation journey as he learned to walk again. NATA became his new family and friends and with their support combined with his own determination and rehabilitation, he was able to build enough strength to participate in Paralympic sports, travelling across the Pacific and the world and building friendships along the way.

One of the friends Vai’uli feels extremely lucky to have met along the way was Mosese, a prosthetist/orthotist from Fiji. Mosese eventually assisted Vai’uli to be fitted his first ankle foot orthosis (AFO). Vai’uli had tried and failed many times to make his own AFO, with it often breaking or not functioning for him. Fitted with his new AFO, Vai’uli was inspired and saw an opportunity ‘to help other people like (him)’ through working as an orthotist.

Vai’uli was working in media in Tonga after studying film and TV production in Fiji when he saw the advertisement for the lower limb orthotist scholarship through Motivation Australia, he had waited his whole life to study orthotics since being fitted with his first AFO and jumped at the opportunity.

After 18 months studying in India Vai’uli returned to Tonga and began working at the newly refurbished Rehabilitation Department at the Vaiola Hospital. He makes a difference to people like himself every day, exemplified when we met a young client, whose story reminded Vai’uli so much of his own that he modified and fitted her with his own spare AFO. 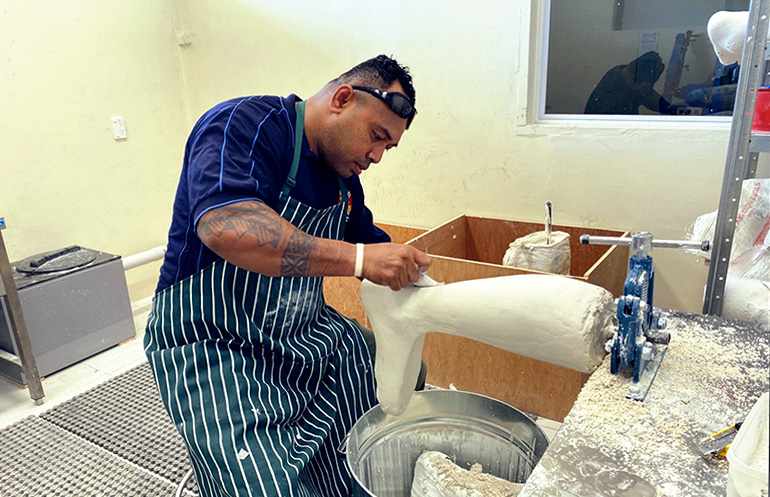 Vai’uli is just one example of how the rehabilitation services at the Vaiola Hospital in Tonga have been strengthened through the TRaM project, with a team of other rehab professionals around him that are improving the quality of life for people living with a disability or recovering from injury in Tonga every day.

Vai’uli is an advocator for disability issues in Tonga and the Pacific, and hopes that his story will raise awareness for the rights of people living with a disability. Further to this, Vai’uli is one of the friendliest and happiest people you will meet, a walking reminder to never give up and keep persevering and we are so grateful that he shared his story with us.

Skip back to main navigation
You are here: Home > Blog > Our work > Pacific region > Tonga > Pacific profiles: Vai’uli Kohinoa
Back to top ^