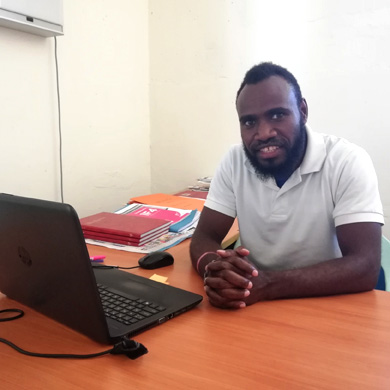 John Bule is a physiotherapist at Northern Provincial Hospital in Santo, Vanuatu. He trained at Fiji National University from 2013 – 2016, before returning to Vanuatu to work at Vila Central Hospital in Port Vila. John reports he was interested in becoming a physiotherapist because of his interest in sports. Outside of his work at the hospital, he provides first aid and physiotherapy for local football teams.

After working for one year at Vila Central Hospital as part of a team of four physiotherapists, John moved to Santo where he started the Physiotherapy Department at Northern Provincial Hospital. He enjoys his work, although admits he faces some challenges particularly in relation to limited resources. Working with limited resources has helped him learn how to improvise in different situations. Further, although being the only physiotherapist can be challenging, John says that it has helped him to strengthen his time management skills as he must work across inpatients, outpatients, mobility device services and outreach programs.

John says that input from the mobility device service project has helped his work hugely. He reports for example that previously patients who had a stroke or an amputation were just sent home with nothing. However, now because of the mobility device service they are provided with a wheelchair or a walking aid, and he knows that this will help them when they get home.

John is happy with the input from Motivation Australia thus far. He feels that the training and visits provided are useful in developing the skills of the staff. He says that he was a bit worried before moving to Santo as he felt he might lose some of his clinical skills, because the hospital in Santo is much quieter than that in Port Vila. However, he reports working in the mobility device service helps him to see lots of different kinds of clients and to learn new skills: “Every time we make an assessment it is a learning experience. I learn new things about posture for example.” John would like to see the NPH MDS team complete intermediate level wheelchair training, as there is a big need for intermediate level services.

In the future, John hopes to complete post-graduate study in New Zealand in relation to sports or musculoskeletal physiotherapy.

Skip back to main navigation
You are here: Home > Blog > Our work > Pacific region > Vanuatu > Pacific profiles: John Bule
Back to top ^